Almost nobody buys from Frank Kern and Andy Jenkins 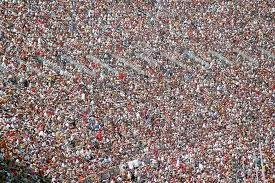 Gazillions of people online, but where are the buyers?

We know that Frank Kern and Andy Jenkins are awesome content providers. As someone who’s bought their stuff (Frank’s Mass Control and Andy’s Video Boss program) I know that first hand.

Everyone in the online marketing world is envious when either one of these boys hauls in $1-3 million dollars in a single week, selling their programs.

Here are however, two sobering facts:

1. Take Frank’s list. He had about 70,000 subscribers for his last big promo. Yes, that’s big and enviable. Took him ten years to build it.

That’s almost nobody. 98.5% said no. His regular subscribers. So much for ‘everyone will want this.’

Welcome to the Internet, where an “online consumer continues to be worth significantly less than an offline one,” (Wired mag). There’s more bad news for online marketers:

“The Web might generate some clicks here and there, but you [have] to aggregate millions and millions of them to make any money (which is what Google, and basically nobody else, was able to do).” See here.

It’s the online market. Yes, gazillions of people sounds good, but they don’t know us. And if they’ve heard of mlm some run away. We don’t know how to reach out to them effectively. Yes, we can put up a blog cheap and fast, but how do we get the right people to visit? And buy? The online marketing world is still trying to figure it out. Meanwhile…

Just this past month, a small group of my friends decided that for our next product introduction, we’d leave the online world. We decided to test something smaller and more intimate. And much older. Here’s what else it was:

Everyone became enchanted with the idea and beliefs behind the product before they came. Then they saw some on-the-spot results. Magic.

Anyway, bottom line: Guess what percent of the folks bought some product that day (two options: a $69 month supply or a bargain box for $495)? And how about the next week?

P.S. The guests were working family types. Everyone was feeling the weird economy. Most were women, over 45, some in their 70’s and 80’s. Many showed up with the usual aches and pains folks begin to notice at middle age. A few were old-time networkers.

P.P.S. Another secret to the success of the experience is what the organizers did not say, and did not show or do. Hehehe. Maybe next time. Maybe I’ll work up a class on how to run an in-home like this. Let me know if you’d come if I did that…email me here. Put in subject: Teach Me In-Home.