Avoid the breadline: Learn to sell 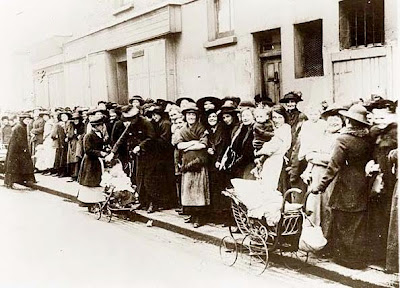 “Best way to help the poor: Don’t become one of them.” Abe Lincoln.

If you know how to sell, you will never face the bread line like many people are doing today. (See also here and here).

If you like and care about other people, you can become the consummate sales person. Someone others seek out because they want to buy from YOU.

In this series of posts I will show you how you might become such a person. Chances are you already know this stuff, but a little tickle could be all it takes to start anew. So let’s get started.

One of the richest men in the world, David Koch, joked how he had acquired enough wealth to pledge $25 million dollars to his alma mater:

Point being, as an eight year-old boy already, this youngster got hold of something – an apple – that someone else happened to be looking for, and which they happily paid for. He learned that skill and refined it for the rest of his life.

Why would one person would pay more for the same apple than another?

Same reasons we all do. Convenience. I-need-it-now. Perceived quality.

Convenience. Been at 7-11 of late? Don’t you knowingly pay more for Corona beer than you would at the big super market or Costco? Um, yes, 7-11 is closer, more convenient. So that time it was convenience over cost.

I need it now. Have a really bad toothache? How much more do you pay for the emergency dentist visit, and willingly? But you didn’t want to wait a week.

Likely whatever you are selling could be any of those things to someone, at different times. We’ll have fun with that later.

As the consummate sales person however, remember this: it’s not your mission to judge the belief system of others. Nor should you belittle or try to change their beliefs (so they buy what you’re selling). Your mission, at least in in the beginning of your sales career, to find matches for what you’re selling. Easier said than done.

Next: How should you decide what to sell?