$100 million or so will move to the Kardashians this year… 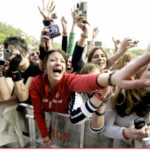 Fame causes money to move. Ergo get fame get money.

This is not something some people can live with, but if you
want to earn more, do you really want to fight what
seems to be a long standing truth about money?

This year, somewhere between $100 million and
$120 million will  move from various people and places to the Kardashians.

“I’m sure everybody can make a list of people, individuals or groups to whom
it would be better to give $120 million than the Kardashians….

“We can probably all make that list. Somebody who is an honest,
hard-working,  morally good, caring person who is a great neighbor –
if they are down to their last dollar and somebody needs it, they would
give it to them, and they’d borrow another dime to give to them too.
They’re a great parent; we can make the list,  they are a damn saint.
And they are poor…

“Man it would be much better if we took $20 million away from the
Kardashians and we gave it to 20 of those people.

“But it doesn’t work that way.

“Every attempt made to forcibly do it fails. When you actually go steal the
money from the Kardashians by force of gun and government, – and redistribute it
to the people I just describe – it runs away from them almost as fast as
it got given to them and runs back to the places it wants to be…” – Dan Kennedy

Fame is one of the reasons money moves about generally. Might not sustain it over a
long period of time, but fame gets it; money moves to famous people in various
and sundry ways…

Doing a webinar ***this Friday Jan 30*** to show you how to develop a
following online…you know, so you can get famous online. For YOUR niche.

Here’s how to get in…