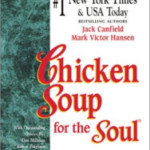 One of the best selling books of all time was, um, ahh…

Rejected by 144 publishers when the guys
sent that manuscript around.

Do you really think ANYONE out there has
ANY IDEA of what will sell?

PS Says Jack Canfield: “If we’d given up after the
first 100 rejections we’d not be sitting here today.”

Yeah. That’s 500 million copies later (of the Chicken Soup
for the Soul Series). But. They. Had. No. Idea.

They just liked what they had done.

Trust your gut and heart. Could pay off big…