Results: Who Would You Buy From First? 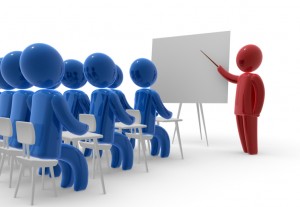 The “Authority or Friend?” survey (see here) hit a hot button. In 24 hours, 148 readers responded.
The results could be eye-opening to anyone having trouble selling their products or business:

Question 1: Who would you rather buy from (when it’s an upscale product
you don’t know much about):

Of the folks who knew what they wanted and voted one or the other:

72 folks said: I prefer an authority.

19 folks said: A friend (who is not an authority).

Of the voters, some 80% chose someone who
they considered an authority.
Only 20% said
they’d choose a friend who was not an authority.

56 folks (38% of the total) “explained” their answer instead of voting one of the above.
Most of them suggest they prefer to buy from someone who knows what they’re talking
about (an authority) but like the “trust” a friend could inspire. Ideally, several said, a
friend who’s an authority and knows what they’re talking about, including competitive
products, would be who they’d buy from first. Many people said they liked doing their
own research on a product as well.

Here’s the summary of the survey so far. Obviously, you could sell a lot ore if you’re perceived to be
an authority. 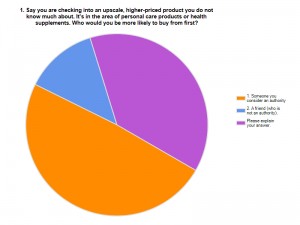