The End of Conspicuous Consumption? 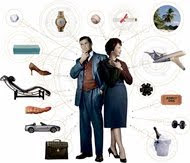 Most popular piece in the New York Times today:

“SHE had so much.

“Yet Tammy Strobel wasn’t happy. Working as a project manager with an investment management firm in Davis, Calif., and making about $40,000 a year, she was, as she put it, caught in the “work-spend treadmill.”

“So one day she stepped off.

“Inspired by books and blog entries about living simply, Ms. Strobel and her husband, Logan Smith, both 31, began donating some of their belongings to charity. As the months passed, out went stacks of sweaters, shoes, books, pots and pans, even the television after a trial separation during which it was relegated to a closet. Eventually, they got rid of their cars, too. Emboldened by a Web site that challenges consumers to live with just 100 personal items, Ms. Strobel winnowed down her wardrobe and toiletries to precisely that number.

“Her mother called her crazy.

“Today, three years after Ms. Strobel and Mr. Smith began downsizing, they live in Portland, Ore., in a spare, 400-square-foot studio with a nice-sized kitchen. Mr. Smith is completing a doctorate in physiology; Ms. Strobel happily works from home as a Web designer and freelance writer. She owns four plates, three pairs of shoes and two pots. With Mr. Smith in his final weeks of school, Ms. Strobel’s income of about $24,000 a year covers their bills. They are still car-free but have bikes. One other thing they no longer have: $30,000 of debt.

“Ms. Strobel’s mother is impressed. Now the couple have money to travel and to contribute to the education funds of nieces and nephews. And because their debt is paid off, Ms. Strobel works fewer hours, giving her time to be outdoors, and to volunteer, which she does about four hours a week for a nonprofit outreach program called Living Yoga.

“The idea that you need to go bigger to be happy is false,” she says. “I really believe that the acquisition of material goods doesn’t bring about happiness.” More here.

Many people have spent their money in order to demonstrate their social status. Many have borrowed it in keeping with the “fake it till you make it” syndrome. Ending mostly in crushing debt. It’s happened to me, too.

Maybe ‘having it all’ is not such a great thing to strive for. The “all” seems to make most of us slaves to the expense of it, the upkeep and maintenance of it, the worries about the possible theft or loss of it, and worst, the trepidation of leaving it when that final moment comes. After which the children and other relatives spend years and thousands wrangling over who gets it. Sigh.

What if like Ms. Strobel’s little family, you decide to want and need so little that you have no debt at all anymore? And for the time being, you add no more? I’m doing that too.

Wanting less is another way to be independent, isn’t it? That’s how Gandhi ended up. Over 20 years, he slowly gave up all the social trappings of his fine English legal education and his very high social status that came with it. Over the next 30 years of his life, he truly did more with less.

Of course, this won’t work for everyone…