It’s not for nothing he’s a multi-millionaire… 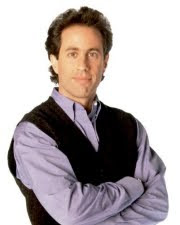 From the Writers Store…

“Years ago, when software developer Brad Isaac was performing stand-up at open mic nights, he received his best advice ever from the already-famous comedian.

“Seinfeld explained his method for success: each January, he hangs a large year-at-a-glance calendar on his wall and, for every day he wrote new material, he had the exquisite pleasure that can only come from drawing a big red “X” over that day.

“Drawing those Xs got to be pretty fun and rewarding, so he kept doing it. Eventually, he began to create a chain of red Xs.

“The idea was to never break that chain.

“Not only does this approach program the body and mind to sit down and write daily – it also motivates you to continue that beautiful string of big, red Xs. If you don’t write one day, you don’t get to draw the X.

“It doesn’t particularly matter what you write. Blogs, articles, scripts, your memoir. It can be anything, as long as you’re actively and routinely pushing yourself.

“But let’s say you’re a screenwriter, and you take it a step further. You might decide that you only get an X for the days you work on your screenplays.

“If you made progress on your scripts every single day for an entire year, how many could you finish? Two? Four? More? Now, imagine that you’ve finally gotten the ear of an agent, producer or director. If you don’t break the chain for two or three years, chances are you’ll end up with a script to please just about any buyer.

“Learning from the pros is imperative in this business, but if you don’t put their lessons into practice, it won’t take you far. And while professional writers offer a wide range of ideas, they will all agree that discipline and determination must come first.

“That means writing all the time. It means not believing in writer’s block. It means turning off the television, silencing your phone, and finding some Shangri La that somehow does not yet have wireless internet.

“First and foremost, it means making writing a major part of your life. To do that, you have to make writing a habit, just like going to the gym, eating healthy foods, or flossing – but harder.

“There are countless excuses, most of them completely acceptable, which hold us back from writing. More often than not, it’s our never-ending To-do lists that take precedence over our passion.

“With Don’t Break the Chain, writing, too, becomes a daily task that we have to cross off that To-do list. This method is a constant reminder that, if we want to succeed as writers, we must acknowledge our craft and respect the process.

“Because the reality is, if you do work at your craft obsessively, you will find success. And if you do become a professional writer, you will need to write every day. Not only that, you’ll be expected to prove that you can constantly produce worthwhile material, and the only way any of us can achieve that is to push ourselves tenaciously.”

Becoming a master network marketer also requires practice. What is the one thing you can do each day, for which you get a red X, that will help you eventually become successful? Eventually – might be one year, two years, or five. Depends on how much you want it.

Example in the NM business:

Chuck M, the top producer in LifeWave, a company I am doing some training for, says his “one thing each day” is a certain number of calls to prospective reps for his business. He aims for a minimum of 60 calls per day. (A lot, yes, but that’s why he’s #1 in the USA.)

What’s your one thing you’d do each day, 365 days a year, for at least ONE year, to become a master of network marketing? It can take ten minutes a day, an hour, or whatever time you will commit. It’s your red X calendar, nobody else’s. Post it below?