If drug dealers make so much money, why are they still living with their mothers? 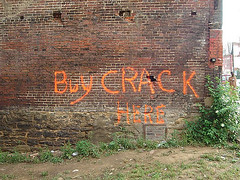 Here’s the story. Change the subject and there, for the grace of God, go, uh….

“The crack gang works pretty much like the standard capitalist enterprise: you have to be near the top of the pyramid to make a big wage.”

“Notwithstanding the leadership’s rhetoric about the family nature of the business, the gang’s wages are about as skewed as wages in corporate America.”

“A foot soldier (lowest level guy) has plenty in common with a McDonald’s burger flipper or a Wal-Mart shelf stocker. In fact, most of (the gang leader) J.T’s foot solders also held minimum-wage jobs in the legitimate sector to supplement their skimpy illicit earnings.”

“J.T’s hourly wage was $66. His (front line-KK) three officers, meanwhile, each took home $700/mo, which works out to about $7/hour. And the many foot solders (under the three officers-KK) earned just $3.30/hour, less than the minimum wage.”

For every big earner, there were hundreds more just scraping along. The top 120 in the Black Disciples gang represented just 2.2 percent of the full-fledged gang membership but took home well more than half the money. “

“So, if crack dealing is the most dangerous job in America, and if the salary is only $3.30 an hour, why on earth would anyone take such a job?

Well, for the same reason that a pretty Wisconsin farm girl moves to Hollywood. For the same reason that a high-school quarterback wakes up at 5 a.m.to lift weights. They all want to succeed in an extremely competitive field in which, if you reach the top, you are paid a fortune (to say nothing of the attendant glory and power.) – Freakonomics, p. 103-4.

Their chances are strikingly similar to ours, aren’t they? Right along with those hopes and dreams of reaching the top with the fortune and attendant glory and power.