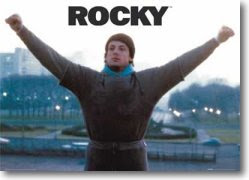 This story has been told many times…

“Sylvester Stallone was rejected as an actor by every Hollywood studio. The script he wrote for Rocky was also summarily rejected by all but one – and they agreed to buy it for a flat fee; Stallone, broke at the time, refused to sell it unless he could star in the movie and receive customary compensation. He made the rounds again and again. He persisted until he finally got his way.

“By comparison, staying stuck like super-glue to an objective; acquiring the needed know-how at any cost; ignoring others’ criticism; refusing to take no for a permanent answer, fighting, scrapping, studying, figuring out one more piece then one more piece; these behaviors are behind the true stories of the rich and famous…” Notes from Dan Kennedy.

What’s your take? Does stick-to-it-tiveness trump talent? And if so, why do we have such a hard time sticking like glue to an objective and acquiring the needed know-how at any cost?