At First She Didn’t Succeed, but She Tried and Tried Again (960 Times) 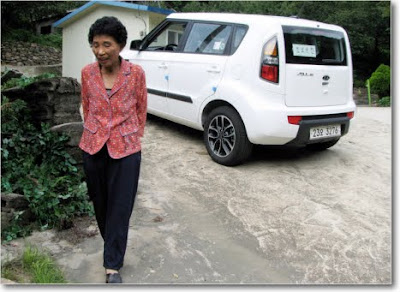 Just in from the New York Times…

Have you heard of, Grandma Cha, a 69 year-old woman who lives alone in a mountain ringed village in South Korea?

Well, today she is an unlikely national celebrity in her country.

“This diminutive woman, now known nationwide as “Grandma Cha Sa-soon,” has achieved a record that causes people here to first shake their heads with astonishment and then smile: She failed her driver’s test hundreds of times but never gave up. Finally, she got her license — on her 960th try.

For three years starting in April 2005, she took the test once a day five days a week. After that, her pace slowed, to about twice a week. But she never quit” See here.(PDF here in case.)

“It was only last November, on her 950th try, that she achieved a passing grade… She then passed two driving skill and road tests, but only after failing each four times. For each of her 960 tests, she had to pay $5 in application fees.

“I didn’t mind,” said Ms. Cha. “To me, commuting every day to take the test was like going to school. I always missed school.”

Going the distance is all about attitude, seems. In Grandma Cha’s case, she had no big expectations. She happened to enjoy and respect the process. Steve Jobs, on the other hand, pictured himself as someone who thought different, and who was consumed with a passion to make gadgets that would make a dent in the universe.