Sometimes you get interest being um, NOT nice… 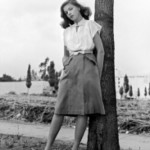 Sometimes you get interest being um, NOT nice…

That’s how Lauren Bacall inspired her own famous movie,
“To Have and Have Not”. The story…

Hawks invited Bacall to the regular Saturday-night parties
he and his wife Slim hosted, but he didn’t want to be obligated to drive Bacall home every time because he wanted
to be free to get tipsy.

Why couldn’t Bacall find a guy to drive her back? he
wondered.

Are you nice to them? he asked her.

Bacall tried it on the next guy she met at a Hawks party,
purring that she wanted to know what store his tie was from,
so she could tell people not to go there. She got her ride
home. When Bacall told Hawks, he asked who the guy was.

That gave Hawks an idea. “Do you suppose we could
make a girl who is insolent, as insolent as Bogart, who
insults people, who grins when she does it, and
people like it?” he asked….”

And that is how that movie came about…