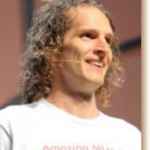 I’ve been a rabid fan of all things Steve Jobs since the two Steves
began Apple in Steve Jobs’ parents’ garage in 1976.

“We started out to get a computer in the hands of everyday people,
and we succeeded beyond our wildest dreams.”-Steve Jobs
(See here.)

Pay plan gives the reps nearly ALL of the product sales money.

No other company I know of – except new copy cats – has ever done that.

The 100% payout – Wood’s brainchild pay plan model – is likely to be the future
of our network marketing industry. (By comparison, reps – who do ALL the
heavy lifting – bringing in orders to their company – earn a paltry 5-25% in the
typical MLM company. Yes, I know they have physical goods costs, but reps
could earn significantly more than they do now.)

Here’s what else has turned Wood’s Goal #1 into real life for countless people,
including me…

EN has a $25 buy in. Most folks can do that. With the $25
starter package, it’s affordable to anyone who wants to test it.

3. The heavy lifting – getting orders from others – especially peeps you know –
is not done by you. It’s done by the two Dave’s in their delicious videos and PDFs.
Totally radical for the industry.

Everyone knows people don’t like to sell, including all the MLM and affiliate
companies. Wood is the only one who did something meaningful about it:

He does the selling FOR you, on the videos and PDFs. Results? Way more
reps making significant income than any other company their size.

I have not personally had to persuade or talk anyone into
buying  programs I’ve been paid for. No one I know of, does.

Downsides. Yes, Wood has some downsides.

1. He talks a lot about the income people are making (with giant income
disclosure statements immediately after, each time). Why? He’s so very proud
of the large numbers of people Who. Are. Actually. Making. Money.

In network marketing, almost no one makes money. That’s
why people still in it talk about how they love the company, or the products, or the other people in it. Maybe because there’s so little income to talk about?

Compare EN’s income disclosure statement to that of ANY other network marketing company’s. Your own, as well.

2. Wood curses and calls the old timid attitudes names – like “wussie
commissions” or even calling people who perform “bad-asses”. I personally
didn’t get past that for 11 months. One day I looked at their educational
programs and realized how stellar and forward thinking they were. Then
I got past it.

Steve Jobs was known for his “bad” language. It’s maybe not necessary, and perhaps Wood will outgrow it. But whatever…Is anyone perfect?

3. Wood dresses like a hippie on stage, shorts etc, and that’s not what
we’re used to for a company executive.

Jobs made jeans and sneakers de rigueur for execs of tech companies. He started early with his unconventional dress. Here’s a pic of Jobs, announcing the new “Think Different” Ad campaign in front of the press in 1997.

If talking funny, dressing unconventionally and thinking different results in way more
people earning money than ever before, is that not a good thing?

Are others envious because crazy Wood is getting huge results, and “they”
are not?

PS I’m one of those affiliates earning crazy money. Live or die, Empower
Network’s David Wood has changed the face of network and affiliate
marketing. Because of his #1 focus: getting real money into the hands of
network marketers who MAKE the sales.

Network marketing will never be the same again because of Wood’s big,
bold changes.  Hallelujah!

PPS Check it out BEFORE you join me. Here.