Who wants to get a massive following like Julie? 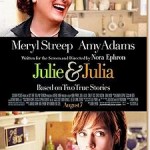 From being a normal unknown person, Julie – in 365 days – became an online celebrity with a massive following. She also got rich. And also became a master chef. I want to take five of you through that same process. If you’re ready.

Julie, a recent college graduate who had just married and
moved to New York, happened to love Julia Child, the chef
and author.

What she wanted was to learn to cook (and be) like Julia. So, Julie
committed to prepare all 524 recipes in Julia Child’s cookbook,
“Mastering the Art of French Cooking” over the next 365 days.

And to make sure she kept her commitment, she decided to write a
daily blog post (blogging was also new at the time, and new to her)
to tell “the world out there” that 1) she was committing and 2) how
the recipes she shopped for, prepared and cooked, turned out.

She started posting. Each day. No one came that she could see.
No one commented. Day 7 she got a comment, and excitedly rushed
to read it. It was her mother. Who made a negative statements and
belittled her efforts.

For the first month, she had 2 comments. Both
from her negative mother.

But in month two, she got comments from several other women trying to
become better cooks. And then each week, more. And as she continued
to “learn, test and report” on her blog, more.

After 365 days of daily experimentation, with lots of explosions in her oven,
she had a giant following.

What she had done – daily – was so admired that she even had a book in
the works. And the next year, Nora Ephron decided to make a movie
about Julie, the experimenter and learner, and Julia, Julie’s idol in
the kitchen.

Who do YOU want to become in 90 days?
How big do you want YOUR following to be?

Get a following online in 90 days. Join my 90-Day Video Run.

You can write daily posts, or do videos or combine.

I recommend the video posting (which u can do with iPhone camera or
computer camera like I do) because it gets others to know, like and
trust you. THAT is what builds a following that you can influence and
who will often buy what you recommend. Because it is YOU.

Here’s what I’m doing. I have a team doing it with me.

=> A video blog, daily for the next 90 days. On topics related to marketing
and getting a following online for those who want that.

=> You can do yours for ANY niche…

=> I use personal video – so people who don’t know me now can
get to know, like and trust me as their marketing guide. I’m right in their
own space like having a little chat over Lattes.

Are you ready to build that big following you have always dreamed
about?

That at the end of those 90 days, you’ll have become if nothing else, a
master of what you are presenting. And maybe with a following who
loves you, to boot.

1. See my videos on how this works, here:

PS Another example of an obscure gent who posted videos online each
day on  something he loved – wines – and got a giant following:
Gary Vaynerchuk.  Know about him?